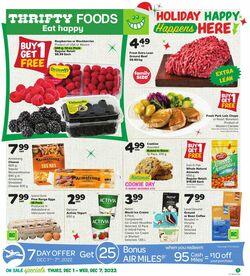 Browsing the weekly flyers of Thrifty Foods has never been easier. Now, you can find all weekly sales and ads in one place! Check it out and save hundreds of dollars!

Thrifty Foods' supermarkets are located in the province of British Columbia. The very popular for the regional chain of supermarkets was established in 1977 by Ernie Skinner and Alex Campbell. Since then the company is expanding rapidly and gaining more and more trusted customers. Thrifty Foods is not only recognized by customers but also by their employees. In 1999 the company was voted one of the best companies to work for in British Columbia and a few years later was mention on a 50 Best Managed Companies in Canada list.

In 2007 Thrifty foods announced a division of another popular retailer called Sobeys. Currently, the company consists of 25 establishments located in the whole of British Columbia. The business is still expanding and there are already plans for opening two more shops in the nearest future. It became the biggest chain of markets on Vancouver Island. Over 5 thousand people found a job in one of the Thrifty Foods' stores. The company is also supporting local communities and is running scholarship programs to help 20 students every year.