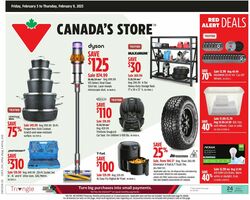 Now, you can find all weekly sales and ads in one place! Don't miss the offer! On this page, you can see all Canadian Tire Weekly Flyers online. 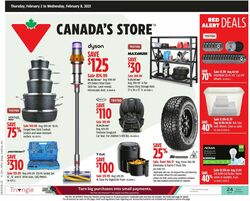 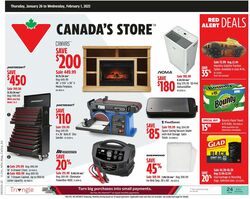 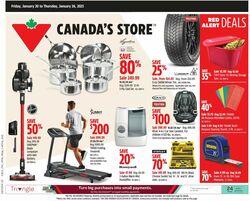 Browsing the weekly flyers of Canadian Tire has never been easier. Now, you can find all weekly sales and ads in one place! Check it out and save hundreds of dollars!

The almost 100 years old Canadian Tire story began in 1922. In that year two brothers John and Alfred Billes put together their savings and invest them in the Hamilton Tire and Garage Ltd. In the beginning, two brothers started catalog sale and were sending their catalogs to many car holders in the Southern Ontario area. It was a huge success that started the expansion of the brand in Canada.

Canadian Tire also wanted to be well known in the United States and took the first attempt at the beginning of 1980. The company acquired a chain of automotive merchandisers in Texas, consisting of more than 80 stores. Unfortunately, it didn't repeat the success of a brand from Canada, and after four years the company lost more than $100 million and decided to sell 40 establishments and close the rest. The major setback didn't discourage the company to try once again. aIn the beginning of the 1990 Canadian Tire hit the US market again, this time starting from scratch. Instead of Canadian Tire new brand called Auto Source was opened. It was a retail business offering more than 25 thousand car parts. It was really successful and new shops were quickly opening, but the same story happened again, and after four years the eight stores they have established, started to lose more and more money. Canadian Tire was forced to sell part of the business and close the rest of the stores.

Canadian Tire headquarters are based in Toronto and Stephen Wetmore is the CEO and the president of the company. Currently, in whole Canada, there are almost 500 Canadian Tire stores. They are located in a specific way, so the driving time to the shop is always about 15 minutes. The company is hiring almost 60 thousand people.