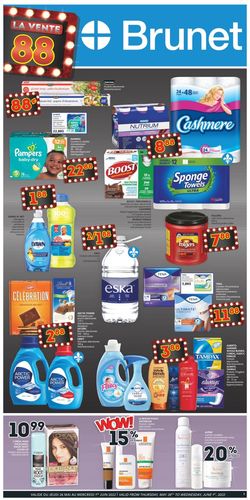 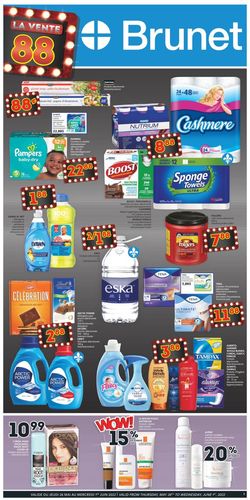 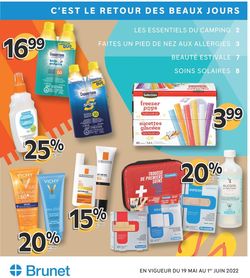 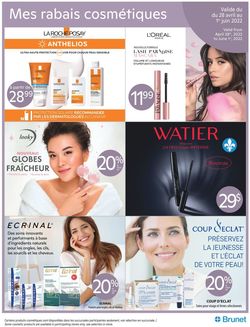 Check the current Brunet Weekly Ad and don’t miss the best deals from this week's Ad!

Browsing the weekly flyers of Brunet has never been easier. Now, you can find all weekly sales and ads in one place! Check it out and save hundreds of dollars!

The history of Brunet, the chain of pharmacy from Canada, has started in 1987 when McMahon bought the Brunet, and Metro Inc. became a parent company for Brunet. Before that Brunet was a family held and run business, opened in 1855, operating 5 pharmacies. McMahon after acquisition kept the previous owner's values and the name of the company.

McMahon is looking after the company very well. The pharmacies located in Quebec quickly started to expand and became popular in an almost whole country. The astonishing growth was possible thanks to launching different business concepts. In 2009 the first project has started, the Brunet Plus, which is a pharmacy with some extra services and a wider range of products like dermo-cosmetics. After a year of running Brunet Plus and it's great success, now project called Brunet Clinique was revealed and again gain a great respect in Quebec's society. In 2011 Brunet hit the market again with the new online tool, which helps the patients to renew the prescriptions and offers a large spectrum of pharmacy-related services.

Currently, Brunet, Brunet Clinique, Brunet Plus and Clinic Plus operates more than 200 stores and is an employer for more than 3 thousand people.