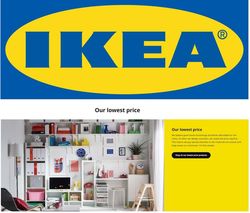 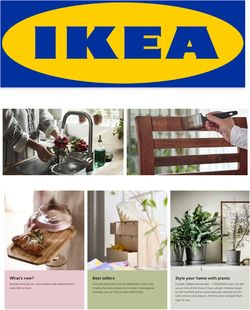 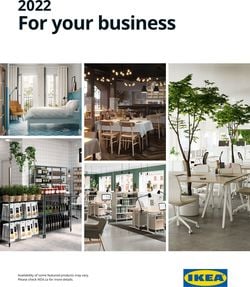 Check the current Ikea Weekly Ad and don’t miss the best deals from this week's Ad!

Browsing the weekly flyers of Ikea has never been easier. Now, you can find all weekly sales and ads in one place! Check it out and save hundreds of dollars!

First furniture store called Ikea was opened back in 1943 in Sweden. The company was founded by Ingvar Kamprad, who as a little child started to show his business running abilities. When he was only 17 years old, after receiving some money as a gift from his father, he opened his first retail business. In 1947 he decided to focus mostly on producing and selling furniture. His plan was to be able to supply people with good quality furniture at low prices, and people will be able to easily transport the furniture from the store to their homes. In 1958 the first store where the Ikea's furniture was arranged to look like actual rooms, was opened. Many people were visiting the shop, and even more, were buying the products. Unfortunately, the competition didn't like the way the company was working and soon Ikea was in a bit of a crisis, as no Sweedish factory wanted to co-operate with Kamprad. Thanks to a factory from Poland that agreed to distribute the furniture, Ikea was able to stay on the market. Soon after Ikea became known worldwide.

Currently, Ikea has more than 400 stores around the world and is producing almost 200 thousand jobs. The popular furniture shop can be found in countries like France, Germany, Netherlands, Italy, Russia, Poland, United States, United Kingdom, China, Australia and Canada. Canada was one of the first countries after Sweden, to have their own Ikea store. The well-known furniture store is present on the Canadian market for almost 40 years, and it was announced one of the best companies to work for in 2006 and 2008.