Now, you can find all weekly sales and ads in one place! Don't miss the offer! On this page, you can see all Lowe's Weekly Flyers online. 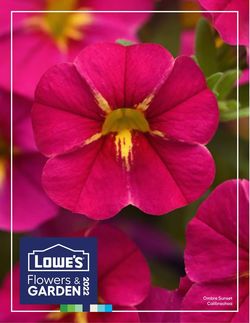 Check the current Lowe's flyer and don’t miss the best deals from this week's flyer!

Browsing the weekly flyer of Lowe's has never been easier. Now, you can find all the weekly sales and flyers in one place! Check it out and save hundreds of dollars!

Lowe's is an American chain of retails stores founded in North Carolina, North Wilkesboro in 1921 by Lucius Smith Lowe. In the beginning, Lowe's was a small, local store selling everything from dry goods to horse truck and groceries. When demand for construction dramatically increased, the store specialized in hardware and building materials. Lowe’s opened its first three stores in Canada in December 2007, in Hamilton, Bramptonand, and Brantford. On February 1, 2008, three more stores were opened and it's still expanding. Currently, Lowe's operates more than 2,000 stores and employ over 300,000 workers. Lowe's has achieved a global success being the second-largest home improvement and hardware store in the world. Within years Lowe's did not change its values, thereby winning its recognition of the customers. Lowe's values are high-quality home improvement products at low prices, delivering professional and friendly service at the same time.

Lowe's takes care not only of great prices for customers but also educates about the benefits of energy efficiency. Lowe's contributes to the reduction of greenhouse gas emissions promoting energy-efficient supplies and won eight notable Energy Star awards.