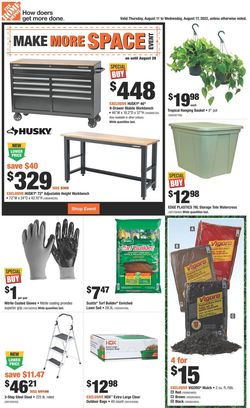 Now, you can find all weekly sales and ads in one place! Don't miss the offer! On this page, you can see all Home Depot Weekly Flyers online. 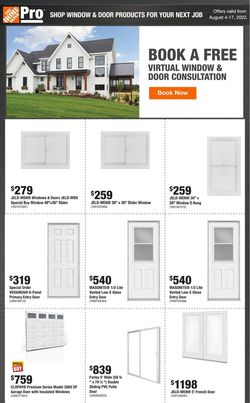 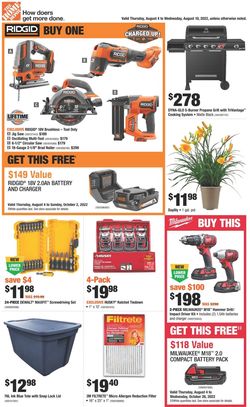 Check the current The Home Depot Weekly Ad and don’t miss the best deals from this week's Ad!

Browsing the weekly flyers of The Home Depot has never been easier. Now, you can find all weekly sales and ads in one place! Check it out and save hundreds of dollars!

The Home Depot - The history

The Home Depot history started back in 1978. The company was established by four business partners Pat Farrah, Bernard Marcus, Ron Brill and Arthur Blank. The company goal was to open a home-renovation supplies store, which will be bigger and better than any others. In 1979 the first two stores in Atlanta were opened and straight away became very popular. Expansion starter very quickly, after the next two years the company opened next two stores in Florida. They were immediately successful and in 1984 the company owned 19 stores. After such rapid expansion, the company faced some financial problem, but they were quickly resolved. Five years later The Home Depot was announced the biggest home-improvement shop in the US. It did not take long to expand even more and in 1995 there were already 350 The Home Depot Stores in the United States.

The great success of the sores in the US made it possible to branch out to different countries. Currently, The Home Depot stores can be found in Mexico, Puerto Rico, China, United Kingdom, South America and Canada. In Canada, The Home Depot stores are located in all of the provinces and there are more than 180 shops. The chain of home-improvement stores has almost 2,5 thousand shops worldwide, and it is hiring more than 400,000 employees, 28 thousand in Canada.