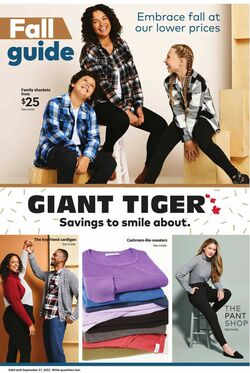 Browsing the weekly flyers of Giant Tiger has never been easier. Now, you can find all weekly sales and ads in one place! Check it out and save hundreds of dollars!

Giant Tiger the Canadian chain of stores was founded by Gordon Reid in Ottawa in 1961. The concept of opening the discount store came to Reid's mind after a trip to the United States. In his early twenties, he was working as a salesman when the opportunity to do some businesses in the US showed up. On that trip, Reid has seen first discount stores. The big success of that kind of stores gave him an idea of using this business model in Canada.

He knew there is a gap in the Canadian market for such business and he was convinced it will work as well as the US branches. After investing quite a lot of money for opening his first shop it happened not work out as well as he planned. After one year the Reid decided to close the store, as it was not making enough profit. The closing down sale, amazingly, brought so many customers to the store, that the shop survived. The chain of stores was expanding quite slow. After ten years on the market, the company owned only six shops.

Slowly but surely Giant Tiger became a well-known and popular discount store in whole Canada. Currently, there are more than 200 stores operating in many Canadian provinces. Gordon Reid is a chairman and a CEO of the company and Thomas Haig is a president and COO. The company is hiring more than 8 thousand people.