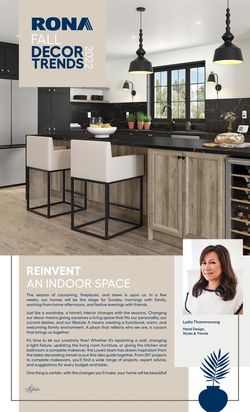 Check the current Rona Weekly Ad and don’t miss the best deals from this week's Ad!

Browsing the weekly flyers of Rona has never been easier. Now, you can find all weekly sales and ads in one place! Check it out and save hundreds of dollars!

Rona is one of the best-known home improvement chain of stores in Canada. The company was established in 1939 by Rolland Dansereau and Napoleon Piotte. At first, the stores were called Les Marchands en Quincaillerie. In early 1960 the name was changed to simply Rona which is a combination of first letters from the owner's names. The stores quickly became very popular and the expansion started. Rona was acquiring smaller companies and was growing in size in no time.

Nowadays it is working partly as a franchise and company-owned retailer and is working underneath many banners including Rona Home and Garden, Reno-Depot, Marcil Centre de Renovation and Rona Cashway. There are more than 500 Rona stores in Canada and the company is hiring more than 5 thousands employees. Since 2016, the company is owned by Lowe's, and there are plans that it may rebrand to Lowe's brand.