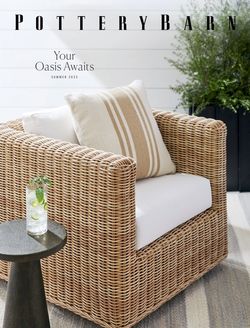 Browsing the weekly flyers of Pottery Barn has never been easier. Now, you can find all weekly sales and ads in one place! Check it out and save hundreds of dollars!

The history of Pottery Barn started back in 1949 in the United States when two brothers co-founded the company. The idea came after one of the brothers found three barns, all full of leftover pottery from a nearby factory. From the pottery shop business quickly escalated to a furniture and home accessories store.

Paul Secon and his brother Morris were swiftly developing the company. Soon after the first shop, another six were established. By 1966 brothers started to sell out their shares and in 1984 when the company consisted of 13 stores, the business was sold to The Gap. Only two years later Gap sold Pottery Barn to Williams-Sonoma, which is still the owner of Pottery Barn chain.

Pottery Barn is a well-known chain of home interior design improvement stores and it expanded from the US to Canada, Peurto Rico, Mexico, Australia and the Philippines. There are more than 200 Pottery Barn stores.