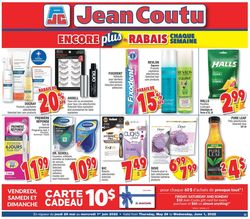 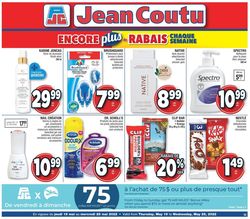 Browsing the weekly flyers of Jean Coutu has never been easier. Now, you can find all weekly sales and ads in one place! Check it out and save hundreds of dollars!

Jean Coutu is a chain of pharmacies founded back in 1969 by Jean Coutu and Louis Michaud in Montreal. In the beginning, it was called Services Farmacia but after thirteen years the name was changed to Jean Coutu Group. The pharmacy quickly became very popular, and the expansion outside Montreal has started. In 1982 the company showed up on New Brunswick market and a year later on the Ontario's one. In 1987 to become more powerful, the company started to purchase smaller companies. The Jean Coutu is also known from being first in Canada to use the internet to help patients to renew their prescriptions and soon after patients were able to also do it over the phone.

In the 1980 Jean Coutu started the successful expansion. Not only by opening brand new stores, but also through acquiring and merging with the competitors, the company was becoming a leader in the pharmacy market in Quebec. After becoming very popular in Canada, Jean Coutu started development of the chain in the United States.

In 2017 the announcement about a different company buying Jean Coutu hit the news. In 2018 it was announced that Metro Inc acquired a popular chain of pharmacies for almost C$4.50bn.