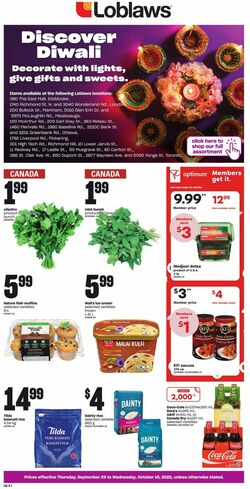 Check the current Loblaws Weekly Ad and don’t miss the best deals from this week's Ad!

Browsing the weekly flyers of Loblaws has never been easier. Now, you can find all weekly sales and ads in one place! Check it out and save hundreds of dollars!

First Loblaw store was opened in 1919 in Toronto. What was making Loblaws to stand out from the competition was a new, different shopping approach which was self-service in large cash-and-carry store. The new type of shop quickly became really popular and after 10 years there were more than 70 Loblaws shops in the area of Ontario. Shortly after the company started the expansion to the United States. The company is doing great till now. In 1970 a few big changes to the business happened. Because of the growing competition the company had to spend a chunk of money on introducing a new logo and a new marketing strategy. In 1981 Loblaws opened their first pharmacy in Winnipeg.