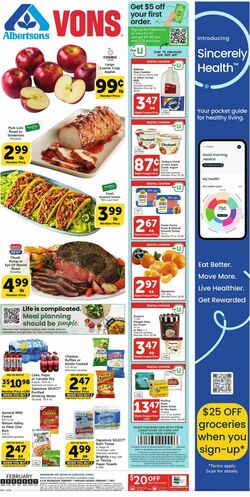 Check out the new U coupons, mix and match deal, $20 off delivery discount, general food products, and other discounts in the Vons Weekly Ad.

You can find all the store's weekly Ad on YAPIK!

Vons Stores is a major Southern California business that dates back to 1906. The initial version of Vons was sold to MacMarr in 1929, and two years later, MacMarr was merged into Safeway.  Von der Ahe founded another Von's chain in 1933, which was the forerunner of the current brand, which has since lost its apostrophe. In 1988, Vons bought several Safeway stores, giving Safeway a share in the firm. Safeway bought the rest in 1997, and the line between the Safeway and Von's banners is drawn in Fresno County, while the actual stores are nearly identical.

Southern California and Southern Nevada are served by Vons. There are now 325 Vons locations in these states. Their product line includes bread, dairy, deli, frozen food, liquor, and floral sales, among other things.